Status
Not open for further replies.

Yesterday I was banned because when I went to the toilet, my step-brother deceitfully went on my PC to comment things like "F*ck the Abos" and other racial terms. I came back to see I have been muted and when I asked my step-brother why, he said to me "read the chat". So I did and after him admitting to the things he said, I proceeded to tell him off. After around 15 mins, I went to get a snack. I told my brother firmly "STAY AWAY FROM MY PC". He willingly complied. Me being silly and unthoughtful I went to get my Flaming Hot Cheetos. I had comeback to be banned from the server. I knew straight away it was him. I then out of anger proceeded to message AttitudeJuanita and called him a (faggot).
This is wrong and I deeply aplogise for myself and my brothers actions. I understand it is my responsibility and I will not let this happen again. I deeply apologise.

(Note: If this appeal is successful, could you please unban Lommisen as I no longer will use Dr_Spelunker.

First of all, I would like to explain the time line of your punishments leading up to your 3 day temp ban.

Yesterday, you were first temp muted by AttitudeJuanita for racism. You were muted for one hour. Approximately 1 hour and 14 minutes later. You were muted again for 1 day due to more racist rantings. You were also given an official warning (three of these warnings = a permanent ban from Auscraft). At this time you sent a message ranting about similarly racist things as you had been in game. And claimed quote: "my f#cking stepbro is hitting me and taking over my PC".

As you can see from the image below, you discussed your mute with AttitudeJuanita, and after you called him a "faggot". This occurrence and language triggered another official warning and this is the action to which you were banned for 3 days. 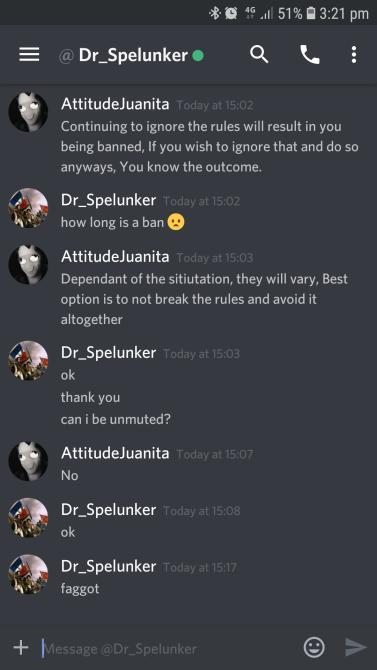 This ban was conducted by myself, and at that time I messaged you that I would be handling your punishments (see image below)

I received no response after this. I gave you an additional warning for your homophobic language.

Additionally, I have been told today that this morning you logged online and repeated the same racist language as before on another account, as well as questionable behaviour in discord.

Reading your Appeal, you give no excuse for the repeated racism, you only account for one or two of the outbursts which you claim your step-brother did and your further activity on discord voice chat (even after you've posted this appeal, your behaviour resulted in a mute on discord). Later after your ban, I even found a great amount of grief to a public warp.

"I had comeback to be banned from the server. I knew straight away it was him. I then out of anger proceeded to message AttitudeJuanita and called him a (faggot). "
The reason you were banned was that you called a staff member a faggot. So you were not banned at the time as you said in your appeal. There was no excuse to call him (or anyone) a faggot. You had repeated verbal warnings and chances, and this unabashed homophobic slur was the last straw which led to your ban.

To be completely honest, I don't quite see how your step-brother had the time to do all these things he apparently did. He got you muted twice for racist language and vile chat, he griefed a decent amount of a public farm, he apparently must have got your other account details too, because he said the exact same things in chat this morning.

I don't particularly believe you and I think you are just using your step-brother as an excuse to be a racist. You own up to calling AttitudeJuanita a faggot, you were muted from discord for saying similarly vile things. To be completely honest, even if your step-brother did these things, maybe you need to get your computer a better password, your account(s) are your responsibility, and innocent players shouldn't have to see racist and homophobic slurs in chat when all they want to do is play a bit of Minecraft.

Its a no on the unban. You can ride out your 3 day ban and if you want your other accounts unbanned (due to being an alt account), you may submit a unban appeal after the 3 days are up.

Status
Not open for further replies.